We fight the insurance companies for the compensation you deserve

You’ve been injured in a car accident. Your injuries require treatment and the medical bills are adding up quickly. You can’t work and there is less income coming in. It’s a stressful time in your life and you need experienced legal representation to help you get justice. That’s when it’s time to call Smitiuch Injury Law.

We stand apart from other law firms in several ways. We offer the resources and experience of a big law firm, but the personal attention only a small firm can provide. If an insurance company won’t negotiate in good faith, we are not afraid to go trial. Since our founding in 2001, we have a record of results for clients. 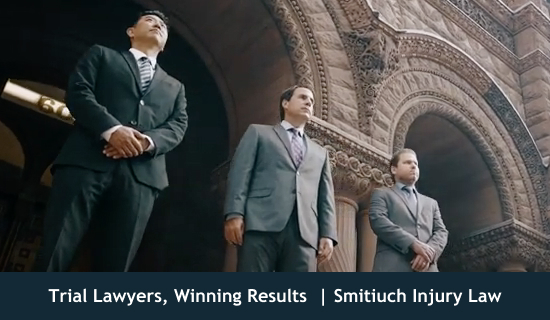 Our firm has recovered millions for victims who have been hurt in car, truck, motorcycle and personal injury accidents caused by the negligence of another. We build strong cases that insurance companies can’t ignore. We don’t rest until we reach a resolution of your case that meets your needs.

If you’ve been hurt in an accident in the Greater Toronto Area, learn more about how we can help. Contact us to schedule an appointment with one of our experienced car accident lawyers. If we represent you, our promise is “no win, no fee” – meaning you pay nothing unless we recover compensation.

On November 7, 2019, a jury in Milton, Ontario, found the owner of an illegal Toronto rooming house responsible for the death of Alisha Lamers and ordered him to pay the victim’s family more than $1.3 million.

In November 2013, Alisha Lamers died as a result of a tragic house fire after being trapped in a basement apartment.

The jury found Konstantin Lysenko responsible for the death of Alisha. He failed to prepare and implement a safety plan for the house, he did not maintain working smoke detectors, he did not provide a second means of egress and there were bars over the basement windows which prevented Alisha from escaping through them.

Michael Smitiuch and Luke Hamer were trial counsel for the plaintiff.

On July 12, 2018, a jury found Sunrise Senior Living Inc. negligent in the death of a 77-year-old resident. The jury reached its verdict after a four-week trial at the Superior Court of Justice in Brampton. Evelyn Coulson of Brampton died of strangulation on June 15, 2009, at a Sunrise nursing home in Mississauga, when her head became trapped between the mattress and a halo ring, a medical device used to help patients get in and out of bed.

In total, the jury awarded damages in the amount of $640,000 after finding that Sunrise Senior Living Inc., as well as the manufacturer and the installer of the halo ring, were negligent in Coulson’s death.

Although it is rare in Canada, punitive damages were specifically awarded against Sunrise. Punitive damages are meant to punish a defendant and are only awarded in specific circumstances, including those in which the conduct is highly reprehensible and departs from the ordinary standards of decent behaviour.

Michael Smitiuch and Luke Hamer were trial counsel for the plaintiff.

On October 5, 2017, a jury in Hamilton returned a verdict in favour of an Ontario Provincial Police officer who was injured in the line of duty. Michael Smitiuch and Peter Cho of Smitiuch Injury Law were the lawyers for the police officer. The trial took almost three weeks and numerous witnesses testified, including medical and financial experts and other police officers.

On March 28, 2012, Constable Dave Sparrock pulled over a vehicle for a Highway Traffic Act violation. While he was writing a ticket in his police cruiser (which had all emergency lights on) a transport truck failed to move over and smashed into the cruiser.

The jaws of life were needed to cut Constable Sparrock out of his vehicle and then he was rushed to the hospital. Constable Sparrock was forced to retire early from the police force due to the injuries suffered in this collision.

Michael Smitiuch and Peter Cho were trial counsel for the plaintiff.

After a five-week trial, a Brantford jury awarded a driver $2.4 million in damages in an incident involving a snowplow. The driver, 37-year-old Greg McKnight of Brantford, was driving home from work westbound on Highway 403 in Hamilton, when a snowplow at the Wilson Street overpass pushed snow and ice onto his car, smashing through the sunroof. McKnight suffered chronic pain and psychological distress.

The two snowplow companies, contracted by the City of Hamilton and Province of Ontario, admitted liability in a case that’s taken nine years to make its way through the courts. On April 20, 2017, the jury awarded $2.4 million to the driver, including $600,000 for pain and suffering damages, $950,000 for loss of income, and $800,000 for cost of care and other expenses.

Peter Cho and Luke Hamer were trial counsel for the plaintiff.

On December 7, 2016, the Honourable Mr. Justice Skarica released his Reasons for Judgment after a trial before him in Hamilton. This action arose from a tragic motor vehicle accident which resulted in the plaintiff (our client) being rendered a quadriplegic. The losses and damages suffered by the plaintiff were considerable. The trial proceeded before Justice Skarica on the issue of liability only. While one of the defendants admitted some fault for the accident, the main issue was whether the City of Hamilton was liable also.

Peter Cho and Michael Smitiuch were trial counsel for the plaintiffs.

On June 3, 2016, a Toronto jury returned a verdict in favour of our clients after three weeks of trial. This action arose from the plaintiff’s fall from a metal stud located above a drop-down ceiling to the floor ten feet below. The plaintiff suffered a comminuted calcaneus (broken heal) and continues to suffer with significant pain.

This was a unique case in that the plaintiff was an independent contractor performing regular work at a warehouse owned and occupied by the defendants’ corporations. Neither of the parties had workers’ compensation coverage. It was alleged by the defendants that the plaintiff was the author of his own misfortune and as an experienced contractor he should have performed the work more carefully. In addition, they argued that the plaintiff did not raise any safety concerns with the work he was being asked to perform and that he had in fact completed the same task safely one week before his fall.

Even before this case made it to trial, the defendants had brought a summary judgment motion to try and put a stop to the lawsuit. Peter Cho of Smitiuch Injury Law successfully fought off this motion and the case continued on.

During the trial, we called numerous witnesses, including an orthopaedic surgeon, family physician, specialist pain doctor and a forensic accountant. In the end, the jury found the defendants 38 percent responsible for failing to give clear instructions to the plaintiff, failing to have a safe pathway above the ceiling and failing to provide the necessary equipment for the job. The jury assessed damages at $515,000.00 plus interest and the plaintiffs beat the defendants’ formal offer to settle.

This verdict was significant because it serves as a warning to owners and occupiers of properties that they must ensure they have the right person to do the job and that their premises must be safe for the work intended to be performed.

Michael Smitiuch and Peter Cho were trial counsel for the plaintiffs.

After six weeks of trial, the jury awarded our client $1.3 million for damages. The verdict was upheld by the Court of Appeal in 2014.

The decision can be read by clicking on one of these links:

After a seven-day trial before a judge alone, a judgment was rendered which awarded our client, an 11-year-old boy who suffered a fractured tibia and fibula, and his family damages of $304,863.26, plus legal costs.

After a four-week jury trial, the jury awarded our clients $1.887 million in damages and the defendants were found to be 65 percent liable.

On January 6, 2017, the Honourable Madam Justice Tzimas released an Endorsement arising from a motion brought by the plaintiff to have the defendant’s waiver ruled to be invalid as it offended the Consumer Protection Act (“CPA”). The plaintiff relied on subsections 7(1) and 9(3) of the CPA which state that consumer rights and warranties under the CPA cannot be negated or varied and that any term or acknowledgement in a contract which purports to do so shall be deemed void.

This is the first decision from the Court ruling on the interplay between the CPA and the OLA in relation to waivers of liability in the recreational industry. Madam Justice Tzimas noted that this was a novel legal question. The question was whether a defendant may rely upon a broad and all-encompassing waiver to limit their liability when it acts as both an ‘occupier’ and as a ‘supplier’.

In her Endorsement, Madam Justice Tzimas reviewed and considered the history of waiver case law and the foundation and interpretation of both the OLA and the CPA. Madam Justice Tzimas noted that this issue had application on the recreational industries, not only in Ontario, but across the country.

Madam Justice Tzimas concluded that the defendant’s waiver was too broad and all-encompassing such that it offended the requirements of the CPA. Madam Justice Tzimas ruled that by operation of subsection 7(1) of the CPA, a defendant cannot disclaim liability for any breach of the deemed warranty contemplated by subsection 9(1) of the CPA. The defendant’s waiver was read down to exclude protections from any claims advanced under the CPA. The remainder of the defendant’s waiver, as it pertained to negligence under the OLA, was found to be enforceable. In sum, the plaintiff was permitted to pursue two distinct causes of action, a negligence claim, which would be subject to potential waiver defences, and a breach of warranty claim which would not be subject to any waiver.

Peter Cho was counsel for this motion.

The full decision can be read by clicking on this link:

The decision can be read by clicking on these links:

The family members of a deceased plaintiff, who committed suicide after her motor vehicle accident, were successful in being added to the plaintiff’s lawsuit more than two years after the accident occurred in order to pursue claims under the Family Law Act.

Marilena DiMarco was riding her bicycle on a sidewalk to avoid a street fair. She tried to swerve around a parked van, lost her balance and fell, breaking her hip. Her auto insurer, Chubb, took the position that this was not an “accident” and, therefore, no benefits were payable. We convinced Arbitrator Pressman that she was, indeed in an “accident” because the parked van caused the fall.

We successfully convinced Arbitrator Arbus that Marilyn Maude’s injuries met the definition of “catastrophic”, and that she was entitled to income replacement benefits, attendant care benefits, housekeeping and home maintenance benefits, as well medical treatment and rehabilitation, all which had been denied by State Farm Insurance.

Dale Cox fell off a bicycle and sustained a catastrophic head injury. He recalled an unidentified white vehicle sideswiping him, but the van did not stop. There were no witnesses, the police were not called (he did not think that they could do anything), and his wife eventually threw out the only piece of physical evidence: the damaged bicycle. Aviva Insurance took the position that his was not an “accident”. We successfully convinced Arbitrator Alan Smith that it was, and Mr. Cox was entitled to accident benefits.

Just prior to arbitration for numerous denials, Pembridge Insurance raised a number of preliminary issues in an effort to thwart Janice Little’s attempt to dispute numerous denials by her insurance company. Arbitrator Alves agreed with our position and allowed Ms. Little to proceed to arbitration.